"Ethica" (Ethan/Erica) is the romantic/friendship pairing of Ethan and Erica. Ethan and Erica aren't very close at all, they get along better and are shown to be semi-friends in season 2 despite her still being bratty and unkind to him. This pairing is unlikely considering the fact that Ethan has a huge crush on Sarah, Erica's best friend. We have reasons to assume that Erica likes Ethan a little more than she is letting on, but this pairing is nowhere near romance.

Village of the Darned

The Date to End All Dates 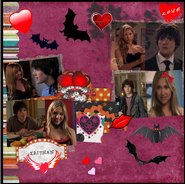