Jethan is the romantic pairing between Jesse and Ethan. Although there isn't much on the pairing in the show or movie, you can simply read between the lines the way you can for Benthan and Rothan. While Jethan is a very unlkely pairing considering Ethan foiled Jesse's plan to revive his cult and Jesse returned simply to reclaim and turn a close friend of Ethan's, it deserves it's own spotlight like Bethan and Rothan. They don't seem to like each other that much, although towards the end of Season Two, Jesse comes back to help Ethan with Vice Principal Stern and the Lucifractor, paving the way for at least a small friendship. 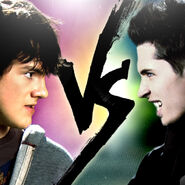